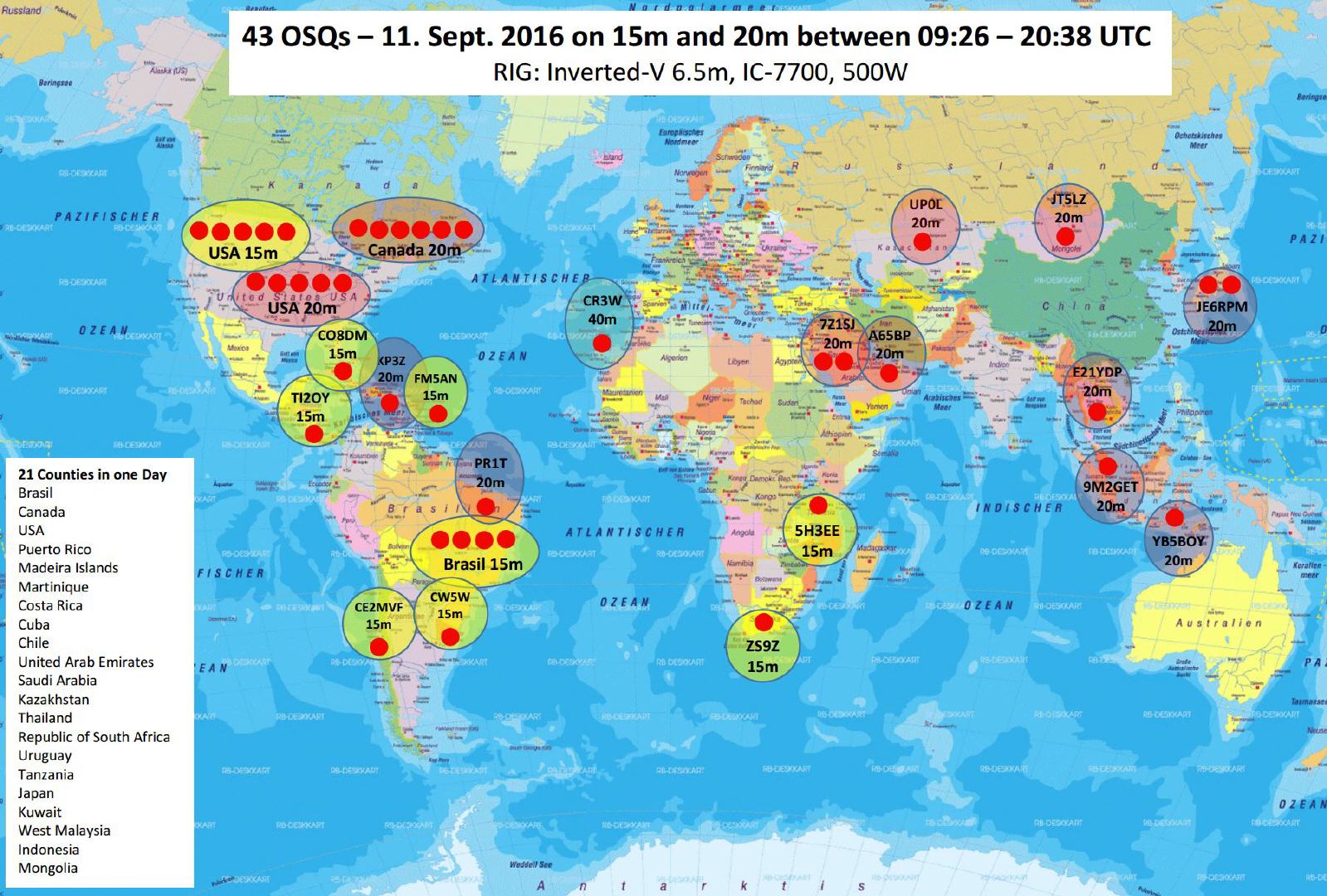 In one Day 43 QSOs with 23 countries on 15m and 20m Band. It is surprising that one day you can make so many connections in so many countries on different bands. At that time I was using my home-made Inverted-V Antenna with only 6.5m short legs and only 500 Watt power. 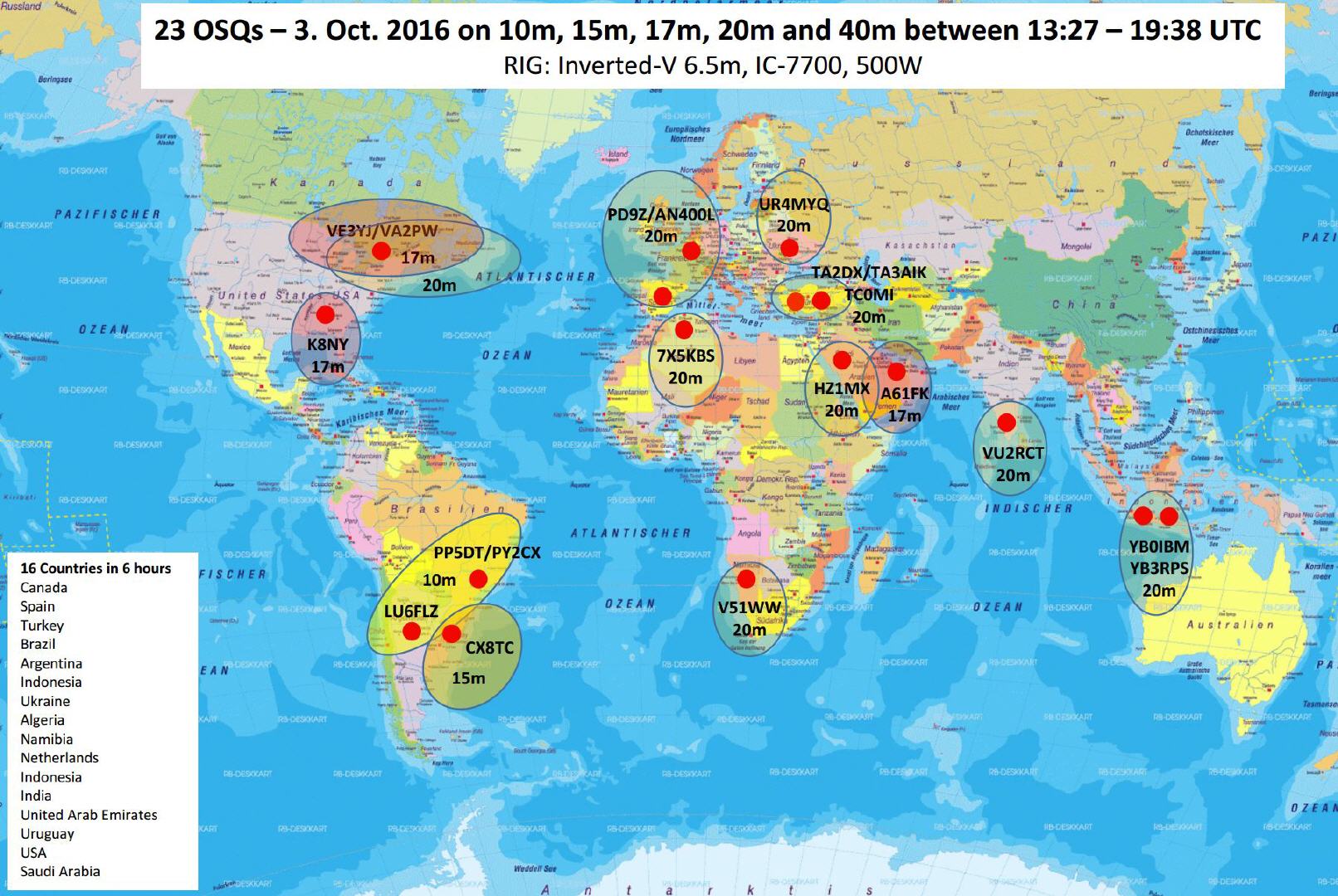 In one Day 23 QSOs with 16 Countries on 10m, 15m, 17m, 20m and 40m Band. It is surprising that one day you can make so many connections in so many countries on different bands. At that time I was using my home-made Inverted-V Antenna with only 6.5m short legs and only 500 Watt power. 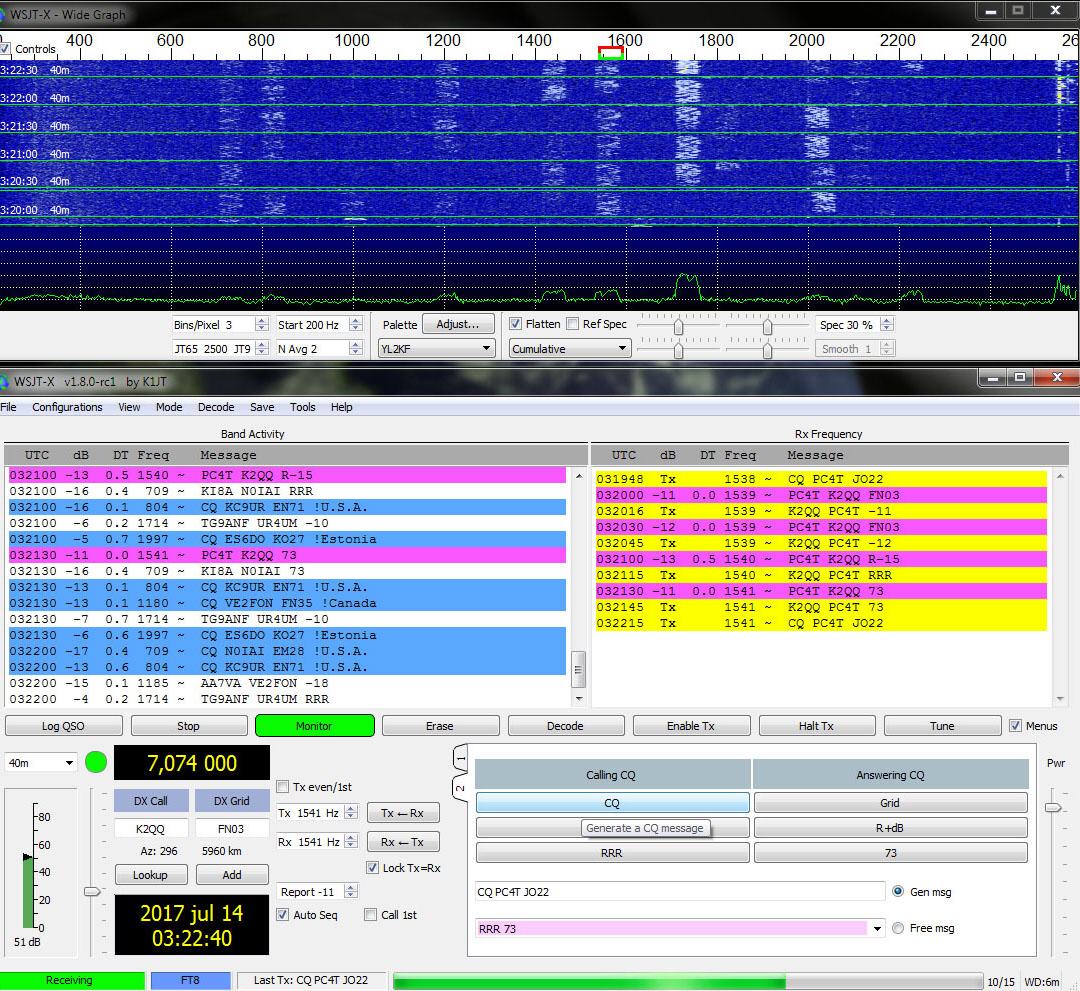 FT8 since June 2017 with WSJT-X Software

With zero sunspots I was able to work DX (10m Band) on FT8 and a SSB QSO with CX2DK Uruguay! Is FT8 creating a tipping point for amateur radio at the very bottom of the solar cycle? The FT8 digital mode is the latest in a series of weak signal applications for amateur radio. Conceived originally for enhancing esoteric propagaint modes such as high speed meteor scatter and moonbounce, Joe Taylor (K1JT) developed a series of applications including FSK144, JT6M, JT65, and JT9. When FT8, jointly developed by Joe Taylor and Steve Franke (K9AN), was announced it was described as being designed for, multi-hop Es where signals may be weak and fading, openings may be short, and you want fast completion of reliable, confirmable QSOs.

What makes FT8 a killer app? Here are a few of my observations:
- FT8 counters the current dearth of sunspots
- FT8 opens dead bands
- FT8 is addictive  see em, click em, work em Boom!
- FT8 lets little pistols work DXCC like a big gun
- FT8 lets you work the world from small or deed restricted lots
- FT8 is a weak signal  power works the really weak ones
- FT8 lets you work DX on 6m when there would be none
- FT8 is suddenly dominating VHF/UHF contesting
- FT8 lets you work weak signal DX without proficient CW skills
- FT8 decoding to -20 dB SNR is like turning 100W into 10kW
- FT8 is like having constant DX beacons on every band
- FT8 puts the DX, WAS, WAZ, etc. on the air when they might not be
- FT8 lets you work DXCC on 160m without a big station
- FT8 lets you call CQ and become the DX
- FT8 is amazing literally space age technology
- FT8 is probably other things I havent realized yet but some of you have

So, will FT8 kill ham radio as some have posed? True, it is mostly automated. True, it reduces the skill required to make DX contacts. True, it removes conversation from the QSO the same as is true of most DX chasing contacts on any mode. True, it removes some of the human factor. But does that make it bad for amateur radios future?

What will ultimately kill amateur radio is not FT8. To the contrary FT8 is an example of what will keep it alive and relevant. What will kill amateur radio is if we we cease to innovate, become old and grumpy, and no longer bring new blood into the hobby. I received my novice license over 31 years ago and still find new and exciting things to peak my interest. Frankly, technical innovation in amateur radio directly led to my career in technology just as for many of you.

Amateur radio is alive and well. FT8 is one just one element of keeping it that way. Hope to work you soon on FT8, some other new mode, or maybe a ragchew on SSB when the sunspots come back.

Here are some samples of DX-QSOs. It is always nice to have a QSO over a longer distance especially in time with little sunspots. But frankly speaking - with a little bit of Power such as 1kW (QRO) :-)

Documentation of some DX-QSOs incl. Propagation

Some Videos of Big-Gun Stations